Future canine assistant is growing up with Everts

The fourth participant of the “Friend for a Special Child” program is a five-year-old boy Everts, who was born blind and explores the world around him only by touch, taste and hearing. Doctors have also observed that the boy is having developmental issues. Faced with unusual things or feelings, Everts becomes frightened and very cautious. The boy was very lucky to be born in a family that loves him very much and does everything it can to help him develop and feel secure around everyday things. Helping enormously with this process is spry a Swiss shepherd puppy named Ori, who has been living and training with Everts’ family since summer to become a full-fledged canine assistant.

Ori joined the family with the support of BeOpen Charitable Foundation’s “A Friend for a Special Child” program, which trains assistant and companion dogs for children with special needs. These dogs are introduced to families when they are just a few months old. Each puppy is selected based on character traits that will work best with the needs and medical diagnosis of each specific child.

Aspiring canine assistant Ori has a restless spirit that is hard to ignore in the spacious flat he inhabits in the Āgenskalns neighbourhood of Riga. Ori is just several months old; he is friendly, curious, and a little bit too unruly – but since day one, the puppy’s relationship with Everts has been a great fit. He adapts to the boy’s needs and expectations instinctively.

“Everts interacts with the world around him very carefully. As tirelessly energetic as Ori is now, he acts like a grown up dog around Everts. When he’s near the boy, Ori kicks into a lower gear and gives Everts time to get to know him. The first thing Everts touched was Ori’s tail, and the dog was very patient, he did not resist,” says Everts’ mum Aija.

Ori’s weekly training sessions are conducted by well-known canine specialist Vladislava Akimova. The pup’s first task is to learn to listen. The other 4 participants of the “A Friend for a Special Child” programme are actively involved in training their future assistants, but in Everts’ case that would be too soon. The boy is still learning to walk and talk, using just a few syllables.

“Since birth, Everts has been a very timid boy. In the first year of life, he would get so scared he would cry when he touched a spoon with his hand. It’s getting better day by day, and we are working with him to calm his fears in various ways. Ori is helping a lot,” Aija comments.

Animals can the best helpers

Pet therapy is an approach recognised throughout the world. It provides effective medical rehabilitation to children working to overcome their social isolation, mitigate neuroses, improve coordination and become more resilient psychologically. Everts’ parents noticed how their son’s fear of the unknown is overcome with animals around. Eventually, they considered having a dog at home. “For Everts, doing something with people is exceptionally difficult, it can be hard to establish some sort of rapport. Everts had several therapy sessions with dolphins and horses, which helped him a great deal. So we came to the conclusion that animals are what helps him loosen up,” his mum continues.

“Ori himself is like a little boy, so basic training is necessary – we need to teach the dog to obey people in any situation. Ori’s canine assistant potential is good: the puppy is measured and calm during training, and he learns very quickly. We are currently starting to work on obstacles, so the dog will stop and make the handler notice potholes, rocks or other barriers on the way. It is good for Everts that the dog lives in the family. Because the boy learns about the world in a different way, having Ori there with him helps with novel experiences – new smells, new sounds, new textures. New emotions stimulate the brain, while touch is a way to activate fine motor skills. Ori’s presence promotes development, adaptation, teaches the boy to cope with new feelings and sensations, with having another being by his side,” explains canine therapist Vladislava Akimova.

Everts is learning to walk – and parents hope that Ori will help out a lot. “Dogs of this breed are large and resilient. Everts is able to move around using a walker, putting his arms on it for support. We hope that Ori can get involved in this process, with the help of a physiotherapist and our canine specialist. Ori might be able to help Everts stand up and walk around, holding on to the dog for stability and a sense of security,” adds Everts’s dad Kaspars.

Both parents of Everts are in the workforce but their flexible schedules allow them to accommodate their son’s needs. Everts spends part of his time with a nanny. The boy also used to go to a nursery school, although the family soon had to look for a different one. Finding an appropriate pre-school educational facility that would accept and integrate a child with special needs has not been easy. Everts’ parents would like him to start attending a crèche in Jūrmala, where the pedagogues are experienced with differently abled children. “It is located in Vaivari, next to a school where he could continue studying. We are very happy that they have regular children playing alongside special-needs kids. They have not had visually impaired children before but the staff are willing to adjust the programme and help Everts out. Jūrmala is far from home, but at least the management over there believes in inclusive education,” Aija explains.

The family is glad to see how the general public are forming an understanding of assistant dogs. The number of venues in Āgenskalns that accept people with dogs is growing. “We often go for walks, the four of us. We went to the seaside in summer. Everts really likes swings, so we take him there every day. We noticed early on that being together really connects us as a family and is great for Everts. It’s so great that Āgenskalns is dog-friendly,” notes Aija. Everts’ family is thankful to the supporters of “A Friend for a Special Child” for the puppy’s special reflective vest identifying Ori as a canine assistant. Getting the public accustomed to having trained dogs like these accompany their owners to public spaces, to school, playgrounds and shops is very important.

Right now, while Ori is still training, his number one priority is being a good friend to Everts. The story of how Ori got his peculiar name is very symbolic here.

“We wanted the name to mean something, and we wanted it to be a one-syllable word that Everts can pronounce. So we named him after the wise dwarf from the Hobbit saga. According to mythology, if you have a dwarf as a friend, he is your friend for life,” adds father Kaspars.

“We are very touched by the progress Everts’ family has been having. We have the upmost respect and fascination for his parents Aija and Kaspars. Everts is the youngest participant of our program, alongside Katrīna in Riga, Roberts in Valmiera, Kirils in Liepāja, and Elīna in Liepupe. We have every reason to believe that this fantastic family will accomplish anything they put their minds to,” concludes BeOpen Charitable Foundation member of the board Ingrīda Šmite. “We are thankful everyone who joined our charitable initiative; we can help these special people out if we work together.”

On the photos: little Everts with his father Kaspars, mother Aija and the future assistant Ori 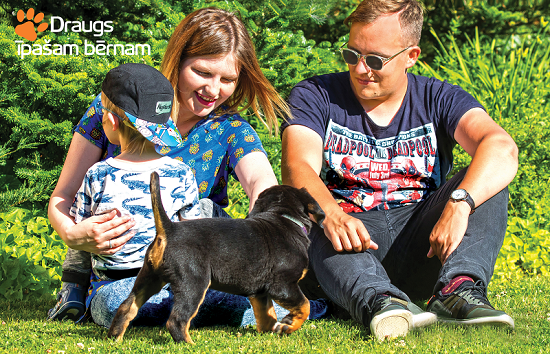 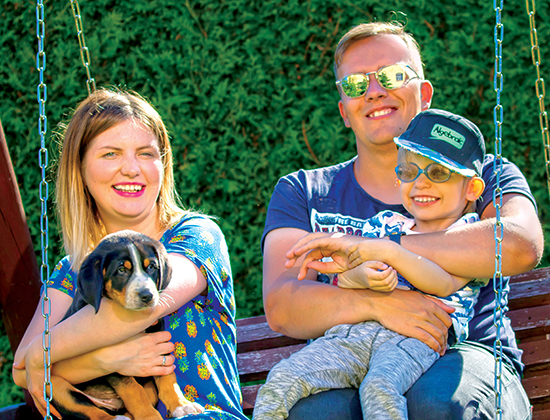 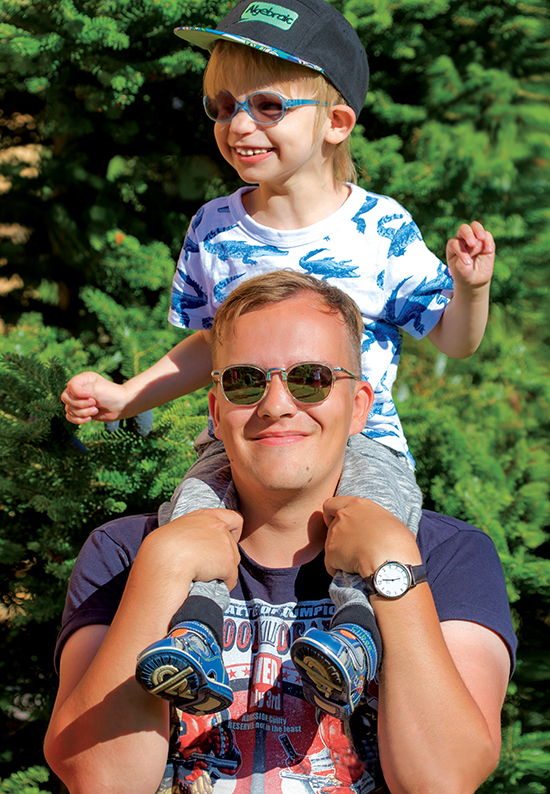 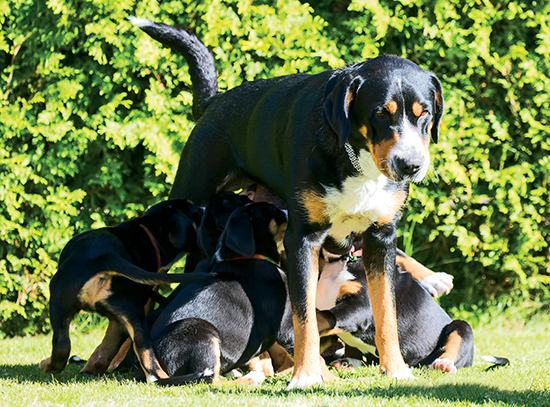 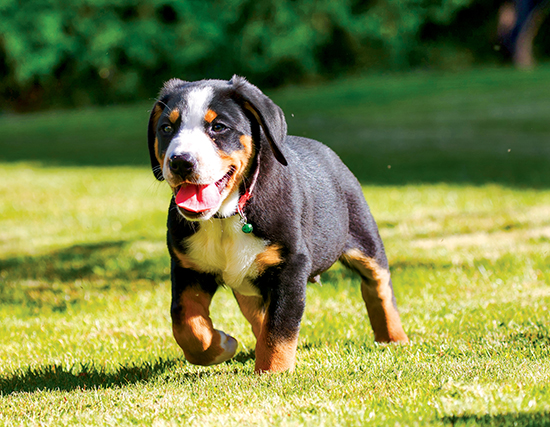 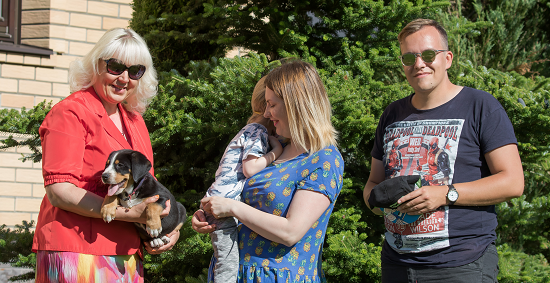