The third participant of “A special friend for a special child” program Kirils is a talented young man living in a small Karosta flat with his parents. He is in the 8th grade at the Liepāja Secondary School No. 3, and attends the Liepāja 2nd music school. In as little as three years, Kirils achieved tremendous success in mastering guitar play. He is also receiving piano lessons. All this would perhaps be less fascinating if Kirils didn’t have severe hearing loss; he can only hear what’s happening around him with a powerful hearing aid.

Early in his childhood, doctors diagnosed Kirils with Alstrom syndrome – a rare genetic disease with just 800 known patients worldwide. The disease brought about multiple health issues, including a heart defect. The young man has very poor eyesight and requires assistance to move around outdoors. Kirils’ parents used to perform this role for him, but now there is great hope for a black Labrador puppy called Jomi, which joined Kirils’ family in early summer as part of the program “A friend for a special child” financed by the BeOpen Charitable Foundation.

A friendship they both need

Experienced canine specialist Māra Semjonova is teaching Jomi to become a guide dog. The first few months of training have been very successful: on the day of our interview, Kirils proudly demonstrated to everyone what Jomi had learned. “Heel”, “Circle”, “Weave”, “Tick Tock” – these are just a few of the commands the pup has mastered.

“Obedience is at number one; this is something we’re still learning. Our Jomi is a restless puppy with childlike energy, even though she has already learned so much – thanks in large part to Kirils. He is devoting a lot of time to working with the dog at home. I am very happy with his commitment”, Māra Semjonova observes.

The canine specialist believes that Kirils had the right dog picked out for him from a pool of potential candidates. Jomi easily connects with people, is happy to train and perform the tasks she is given. What’s most important is the emotional rapport Kirils and Jomi have developed.

“Kirils is the true master to Jomi. He feeds her, trains her, calls her his princess. When we get up at six in the morning to take Kirils to school, Jomi heads towards him immediately. Kirils does not need reminders to feed the dog, he has this wonderful voice alarm that gives him the current time at the press of a button. I’m so happy Kirils is becoming more self-reliant”, says Kirils’ mum Svetlana.

Joy and fulfilment in music

The true friendship between Kirils and Jomi is easy to see when he plays the guitar. Jomi will lie at his feet and take a peaceful nap. In spite of all the homework he has to do, and the music school he has to attend, and the exercises he’s doing with Jomi, the young man plays his guitar for at least three hours every single day. He mostly selects tunes by ear, listening to music he finds on YouTube. His repertoire includes a lot of classic rock, including songs by Metallica and Scorpions. Kirils has a special place in his heart for feisty Spanish melodies. Because his vision and hearing are impaired, he seems to be deriving a lot of satisfaction from music.

This year, Kirils placed 2nd in the “Latvian guitarist of the year 2017” competition, but this success is underpinned by daily hard work. His family is also proud that Kirils got to perform in front of a large audience at Arēna Rīga early this year, during the half-time of the hockey match between Dinamo Rīga and SKA St. Petersburg. Kirils entertained the viewers with his guitar rendition of a Spanish dance melody called pasadoble. Before this performance, his parents and guitar instructor Dace seemed to be a lot more anxious than Kirils himself, who did just great. This is a very fond memory for him.

Helping society recognise the special status of an assistant dog

Kirils’ family lives in a block of flats in Karosta (a former war port in the Russian Empire), close to the forest and the sea. Because his health condition increases Kirils’ risk of gaining excess weight, regular physical exercise is essential. The family often takes long walks through the forest and along the coast, now joined by Jomi. The parents are hopeful that Jomi will eventually take over the functions of a guide dog, allowing Kirils to take his daily walks on his own, perhaps even travel without the assistance of his mum and dad. The matter of independence is becoming more and more significant now that he is growing up and spending more time among his peers.

His mum Svetlana is occasionally saddened by how many people don’t really understand how important a guide dog really is. The family has heard rebukes in a local shop, ignorant comments on a public bus in Liepāja.

“We need to help society understand that a guide dog has special status, and a right to be in places where having dogs is usually prohibited, or frowned upon”, BeOpen Charitable Foundation member of the board Ingrīda Šmite explains. “So we had special reflective vests made for Kirils’ future assistant and the other four canine participants of our “A friend for a special child” programme, with text indicating these dogs’ special mission. I am certain that people in Liepāja will start paying attention to this, and the number of locations that welcome our four-pawed friends in this city will increase.”

For a sightless or visually impaired person, having a guide dog is a substitute for having good eyesight. The guide watches what happens around it, notices obstacles on the master’s way and analyses potential threats, such as crossing a busy intersection. A dog that performs such a function needs to accompany its master everywhere – especially outdoors and unaccompanied by other people.

Jomi is about to start training for these tasks in an urban environment. “We have started studying Kirils’ most frequent daily routes. Jomi should be up to the task, always stopping at intersections even if her master doesn’t stop or someone is helping him cross. Later, we will be learning various other situations in the city: Jomi will ride the bus, where she should be able to guide Kirils to a free seat. In the street, she needs to recognise a pedestrian crossing and lead Kirils around obstacles. This is very difficult – the terrain and situations that may arise are extremely varied. We have a lot of work ahead of us, dozens of hours in training”, the canine expert explains.

During our talk, Kirils’ parents explained another hobby of his – crafting figurines. Kirils makes them according to his own personal vision and perception. We took a look at his work and saw that the very first one Kirils made about seven years ago has a striking resemblance to his dog. “They say dreams become reality, you know”, Kirils’ mother says.

The first destination Kirils would like to reach without being escorted by parents is the music school. The young man also dreams of spending more time alone with his friends, and going to the swimming pool as often as possible. Kirils’ commitment and perseverance deserve results – and having a canine companion can become a great step forward towards his dreams. We can help each child accomplish their dreams – in particular those who really need our support.

“Unfortunately, guide dogs in Latvia and other countries are expensive, and very few people can afford them outright. Providing this type of canine assistance at the state’s expense is not possible in Latvia. The “A friend for a special child” program financed by the BeOpen Charitable Foundation has specialists training guide dogs and assistant dogs for five children with special needs”, Ingrīda Šmite relates. “Unlike other programmes, this project has the dog join its future family as a small puppy, and trains to perform important tasks at home. Kirils in Liepāja and four other families in Latvia – Katrīna and Everts in Riga, Roberts in Valmiera, and Elīna in Liepupe – are training their future friends and helpers under the professional guidance of dog experts”.

On the photo: Kirils together with his parents, canine specialist Māra Semjonova and a guide dog to be Jomi 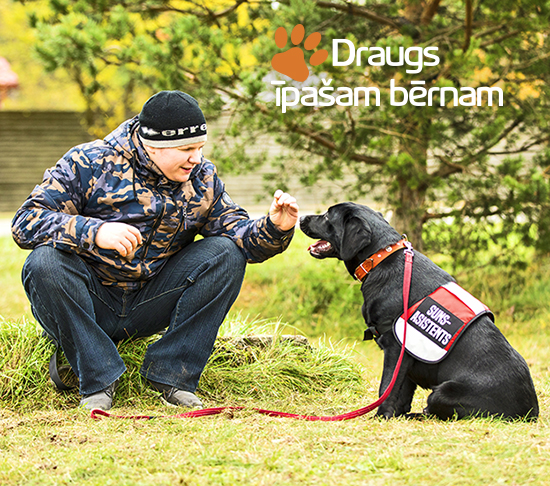 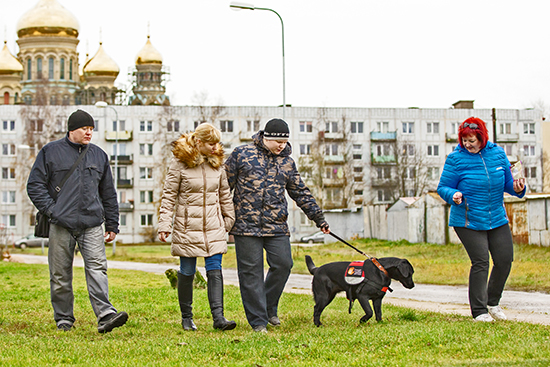 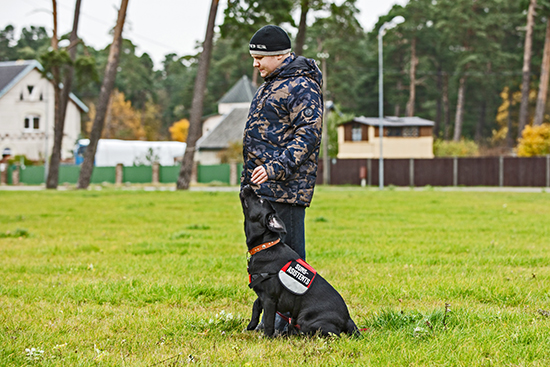 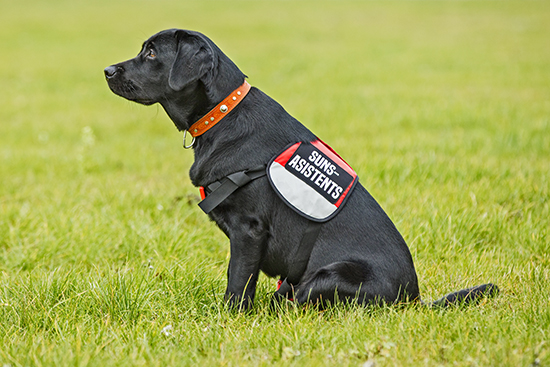