Roberts and Kleo: believing in your dreams and making them a reality

Roberts is the second participant of the “Friend for a special Child” program. When he was one year old, Roberts was diagnosed with cerebral palsy, expecting that the boy would never walk or talk. However – thanks to the unconditional love of his parents, their trust in a higher power and, above all, hard work – what was once dismissed as improbable is now a reality; Roberts can not only talk and move on his own, he is also studying with good grades at the Viesturs Secondary School in Valmiera, in the 10th form. He is respected and admired by classmates. He is now dreaming of a career in sports journalism. Early this year, a lovely creature entered the family of Roberts Jurka – a female Bernese shepherd puppy they named Kleopatra. She has been training to become Roberts’ canine assistant thanks to the “A Friend for a Special Child” program financed by the BeOpen Charitable Foundation.

Mum, physical therapist and speech coach rolled into one

When Roberts was born, doctors gave him the diagnosis of hydrocephaly and assigned cranial surgery when he was just half a year old. The surgery was cancelled at the last moment, when the treating physician suspected a misdiagnosis. Only later, when Roberts reached the age of one, was he correctly diagnosed with infant cerebral palsy. The daily life of Roberts’ mum Inga was devoted to him and him alone – she was not only his loving mother, but also his physical therapist and speech therapist. Initially taught by despair and lack of options, Inga is thankful to the people who helped her regain optimism and understand that she was not alone with her problems in the family, that hard work, rehabilitation and determination can achieve a lot of things. Luckily, there were doctors who said that every hour invested in little Roberts would bring about increasingly better results. Later, Roberts’ mum established the association “For Latvian Children with Mobility Impairments”. It has been operating successfully for 16 years, receiving the Ombudsman’s Office award of the year – Defender of Children with Disabilities.

As a result of brain damage, Roberts has increased muscle tone, difficulties with making movement, balance, and hand-eye coordination. He speaks slowly – especially when he gets emotional – but otherwise he is a regular young man with big dreams and hopes for the future. Ints, Roberts’ dad, chose shift work that would allow him to take Roberts to and from school, help him take the stairs at school, and take care of him if necessary. His father is his assistant. At school, Roberts moves around using a walker or a rollator, and his classmates are happy to give him a helping hand. For longer walks, he does need to use a wheelchair.

Theatre class should groom his skills for a future career

Roberts is the eldest of three children in Ints and Inga’s family. The young man has attended the Viesturs Secondary School in Valmiera since the first form, despite the fact that this school is not very well suited for pupils with special needs. His parents wanted their son to go to a regular school, and have been proven correct – Roberts’ average mark in school is around 8.5. Because he is very good with humanities subjects, he started attending theatre class. Roberts himself says he hopes to work on his speech and composure in front of a camera, which should help his dream career as a sports journalist. “This is very important for me because I’d like to become a sports journalist and commentator. I wouldn’t want to commentate a rugby match but I like all the other games,” Roberts explains, admitting that sports announcer Anatolijs Kreipāns is his big inspiration.

Now, the daily routine of regular physiotherapy, homework, and miscellaneous chores includes training with Kleopatra, whom the family has affectionately called Kleo. As part of the “A Friend for a Special Child” program, dogs come into the families of their future masters as small puppies – learning little by little to become fully grown assistant dogs. Kleo’s mission, after she is trained by canine therapy and training expert Ligija Frišfelde, will be helping Roberts out – bringing various objects, turning lights on and off, escorting Roberts on his everyday business, and doing other things to make his life easier. At the age of one and a half years, Kleo is performing another important task: canine therapy.

“Cerebral palsy comes with a variety of neuroses and nerve damage, making regular physical therapy a must. We hoped that the dog would motivate him to be more active and help him emotionally. Sometimes, when a goal can’t be accomplished immediately, there may be negative emotions like anger. At times like that, Roberts has said to me, mum, when you get angry, you can walk away, but I’m staying. Kleo is helping Roberts to break free and process these negative emotions, to communicate more with others. Since the first few days, Kleo has been able to sense Roberts on an emotional level,” Roberts’ mum Inga comments.

The emotional link Roberts and Kleo have developed is easy to see in the morning, when Roberts wakes up: Kleo comes by on her own, offering comfort to the boy. “She hops onto the bed and lies down nearby, snuggling up to him. As a teenager, Roberts started to have epileptic seizures. They came up rarely – once every 3 or 4 months – but they would always occur when he woke up in the morning. I can’t shake this feeling as if Kleo knows and feels this, coming to Roberts as soon as he wakes up in the morning,” his mum adds.

Roberts’ progressive ability to express his emotions openly and be more frank has been noticed by canine therapy expert Ligija and Roberts’ father Ints. “Before Kleo came into our family, Roberts was very wary of animals. He never really wanted a dog at first; now, with Ligija’s assistance, the two have become great friends. As parents, we can see major change. Kleo has given Roberts a lot, emotionally in particular. She helps him open up and be more personable,” Roberts’ dad explains.

Canine expert Ligija stresses the importance of therapy that a dog can provide without special training or encouragement – it occurs instinctively.

“We have been practicing with Kleo and Roberts since spring. We are training her to obey and perform all kinds of commands. By the time she has completed her training, she will need to do everything that Roberts could need in his day-to-day life. Kleo’s therapeutic function comes about naturally – she just does it whenever they’re together,” Ligija comments.

Despite the ominous diagnosis, his parents have been intent on having Roberts socially integrated and comfortable among peers. The number one motivator for Roberts has been his dad, Ints. He told the boy that he would not have any leeway for having health problems. Although Roberts’ mum wants to console her son from time to time, she admits that the father’s stern outlook may have been the reason why Roberts has grown up with the ambition to achieve a lot in life and always give 100%. Now, Roberts has invested his motivation and persistence to training Kleo.

Because Roberts is going to theatre class, rehearsals are part of his daily routine. In this year’s adaptation “Pinocchio”, Roberts is playing the role of the woodcarver, Signor Geppetto, sat in a wheelchair. Roberts and his classmates have successfully participated in seven productions so far.

Roberts helps us see with our hearts

“Roberts is the second participant in our “A Friend for a Special Child” program, and we are happy to see so much growth and progressive positive change in the space of ten months. He is getting more and more involved in various major events. In summer, Roberts proudly took part in the city’s festive parade, and Kleo never spared any attention for her master in his wheelchair, calmly walking in a crowd with hundreds of people,” observes BeOpen Charitable Foundation member of the board Ingrīda Šmite.

“Roberts actively attends sporting events, and has been taking long trips from Valmiera to Daugavpils together with canine expert Ligija, visiting his new friend, who keeps bees. With his active presence, Roberts certainly surprises some people. He also helps the public understand about the opportunities that children with special needs have for a valuable lifestyle and career,” Šmite adds.

On warm, sunny days, Roberts and Kleo are frequently seen together in the Valmiera city park. The bright reflective vest spelling out “CANINE ASSISTANT” clearly indicates Kleo’s special role and duty, while getting the people of Valmiera accustomed to this dog being allowed in public spaces together with its master. BeOpen Charitable Foundation has provided special vests like this to the other four canine participants of the “A Friend for a Special Child” program: Everts’ Ori and Katrīna’s Grēta in Riga, Kirils’ Jomi in Liepāja and Elīna’s Corrie in Liepupe – raising awareness, promoting understanding, and opening many doors.

On the photo: Roberts, his mother Inga, father Ints, canistherapy expert Ligija Frišfelde and Charity Foundation member of the board Ingrīda Šmite 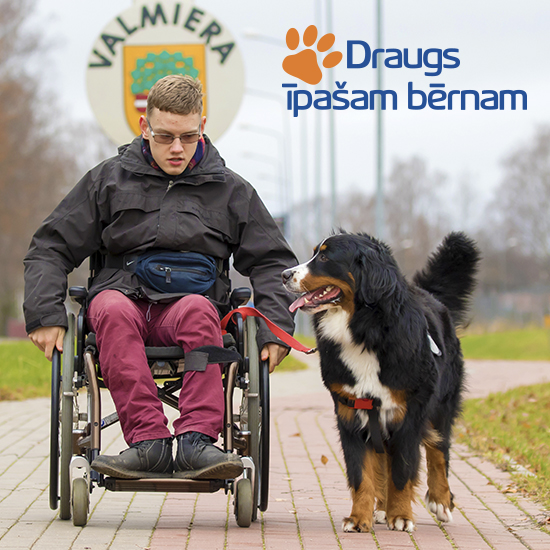 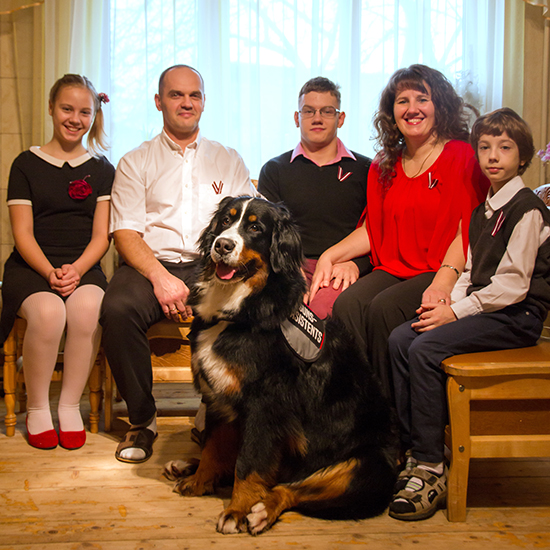 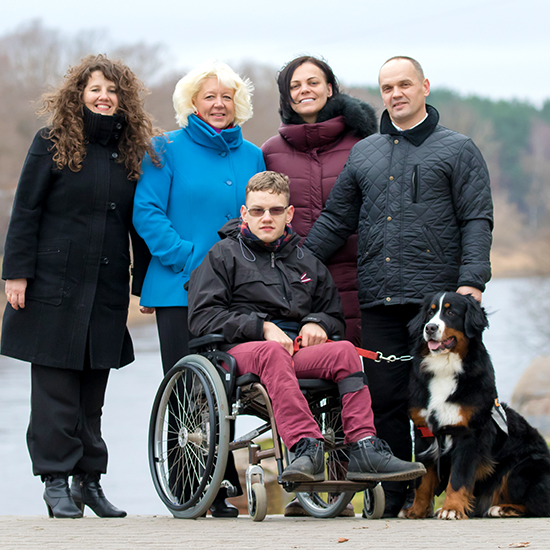 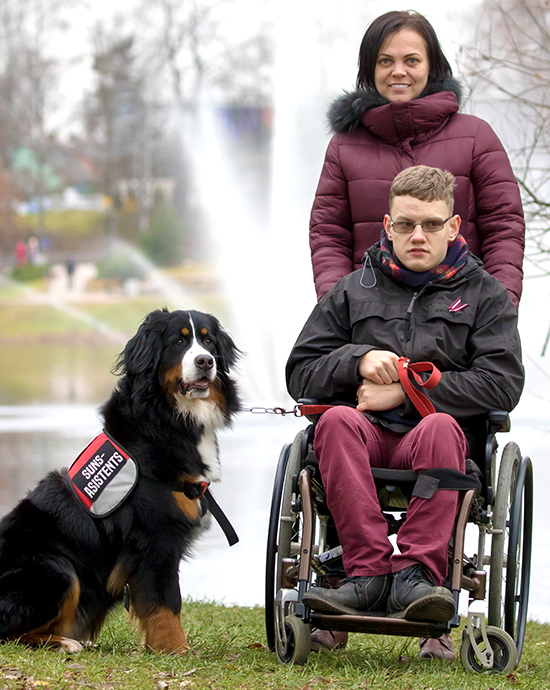